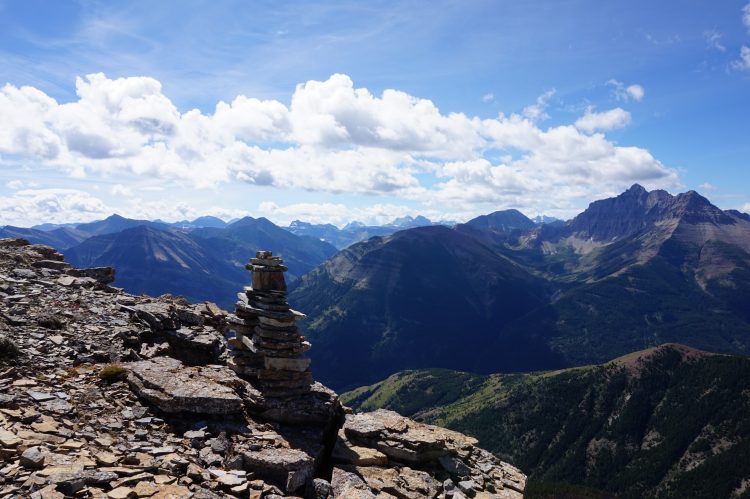 So this is where it ends. Well the hiking part at least. I have decided to finish the hiking portion of the trip with only 90% of the GDT and a few weeks in the north. And at first it scared me to do this, to call it quits. I stopped the hike with some parts yet to be done. And it feels like…. I want to say giving up. But it’s not. Because I’m not stopping, not done adventuring. I am just changing the itinerary.

So returning to finish the last leg of the GDT in Waterton, sneaking a couple summits in, hiking through tunnels as visiting Montana was the perfect way to wrap it all up. Though the GDT will for now, remain slightly incomplete it’s time to have some different kind of fun. Kimberley, Victoria, Vancouver and Squamish are all on the to do list. As well as a fishing and climbing trip jeeping along the foothills and bluffs on the eastern length of the Rockies through forestry service roads and along secondary highways! But those are stories not yet written.

The return to Waterton park involved catching a bus at 5pm edmonton and arriving at 3 am in pincher creek. At 330 am I found a field where I could set up and camp for a few hours. Knowing I would need an early start in the morning I struggled to get my 3 hours sleep. Thank God pincher creek has a tim Hortons! After 2 cups of coffee I set off to hitch a ride slightly closer to the park saving 2 days of walking the flat highway.

In the last third is a steep scree scramble up to the ridge below the summit.

I managed a ride to the edge of the park with a guy from Montana and hiked in. Eventually I got to a campsite at Crandell lake and then in the afternoon decided to climb mount gallwey. 1000m over maybe 3 km. 2 hours. Sweaty. Amazing views though. And a really fun climb up. A steep hill brings you to the first shoulder on the west. Then it’s a mix of hiking and scrambling strips of rocks and boulders.  In the last third is a steep scree scramble up to the ridge below the summit. Over the back of the ledge is a Gulley like formation in the rock and makes for a class 4 scramble up. Then you approach the south side and climb to the top. 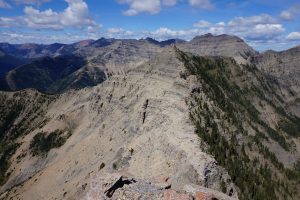 The way down pumbled my knee though so I spent Saturday mostly relaxing, also because the wind was outrageous. No where has the wind been this bad in my travels. Massive gusts all of a sudden. Besides, it was nice to just sit and read and enjoy the beautiful mountains around me. Still a relaxed day meant around 15km of hiking!

And tomorrow I will be up early to get to Waterton town site to catch the boat across to the crypt lake trail.

To me it seems that here, the mountains clash with the Plains in a fantastic and dramatic way. Like a wall of stone built by gods, it lines the ever so flat and forever sky of the prairies.

Waterton, to me, is unlike most of the Rockies for mainly one of a few good reasons. To me it seems that here, the mountains clash with the Plains in a fantastic and dramatic way. Like a wall of stone built by gods, it lines the ever so flat and forever sky of the prairies. The rest of the Rockies seems to graduate back and forth of the flat Plains. Creating the foothills, bluffs  or crags. It’s so violent the start and stop here, in Waterton, it’s pretty perrty in other words. 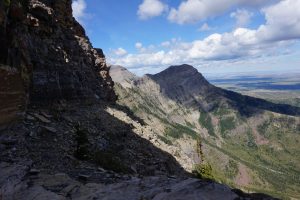 The following day I had hiked out through a portion of the park and in the late afternoon found a cool outcropping of rock to relax on. The cradle shaped rock provided an excellent place to put my feet up and have a nap. Slightly near the road but up in the hills it was a great view point to enjoy the mountains from. I believe I fell asleep for an hour or two and woke to this strange feeling of being watched. I stirred suddenly and was surprised when a flock of crows quickly scattered after hanging around a little to close to me.

I started with grizzlies it only makes sense to end the trip with them to right?

Still I had this feeling in my gut that it was time to leave. So I headed back down the hill and found a few people had stopped and gathered on the road near me. When I got down near
Them they mentioned they were about to start yelling  up to me. Apparently there was a grizzly hanging out in a meadow only a hundred feet above me. Sure enough I turned around and looked to see him rummaging around the Meadows not far from my napping spot. Haha, listen to your gut right! I suppose if I started with grizzlies it only makes sense to end the trip with them to right? 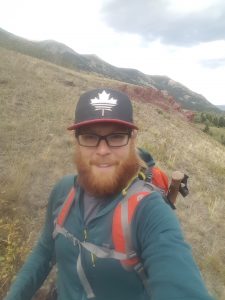 So this morning I set out early.  Early enough to get from Crandell lake to Waterton village, walking I would try to hitch a ride in. But I wasn’t counting on it due to the fact I left so early. I spent  the first 2 hours in the morning walking. I started to wonder if I would make the boat!  Fortunately the last 30-40 mins were done in 3 minutes as another American couple picked me up! 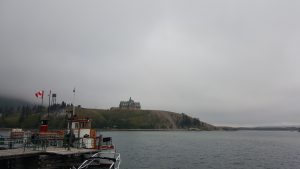 A quick 19 minute boat ride across the foggy lake was made beautiful mostly by watching the prince of wales hotel fade like a ghost into the fog as we crossed the lake.

Next is the hike up. Now…those who know me know that I am not one to brag…. usually 😉 . But if I may excuse myself I’d like to brag for a quick second. So I was the second boat of maybe 25 people to cross the lake for the trail head. And I stopped to reorganize my pack before hiking. And I knew I was in good shape, I’ve hiked most of the length of the Rockies. But I was about the 20th person on the second boat to start hiking.  I started near the back and beat most the people from the 30 Minute earlier boat as well as ours annnnd that was with my 35lb pack on. Just saying.  #pretentiousasshole

it felt really good to hike that strong, that consistently and to get to the lake early

But actually it felt really good to hike that strong, that consistently and to get to the lake early and one be one of the days first. And all of our rewards was the stunning view of the lake and National park that shares its border with Americans Glacier park.
Anyways! After getting to crypt lake my first move was to head for the cull near the back of the lake to get to the border. Once at the back of the lake it was a scramble up a super sketchy scree slope all the way in the fog. Once I hit the border (and double checked my GPS)  I had officially become an illegal immigrant. Not only that,but I also illegally brought food across the border, among other things that of which I am sure I shouldn’t have.
So I’m pretty sure that means I’m like, officially a space pirate.  Just saying. Or something like that. 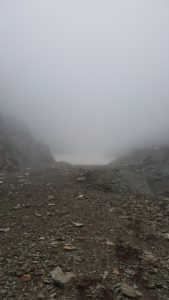 My view into Montana!

Anyways. So after hanging out on the scree slope for a bit admiring the 50′ of view of fog I figured I’d head back down. The timing was actually perfect as I climbed down the sun beat through the thick mist and soon was burning my skin. The lake was full view and it was really quite beautiful. It rivaled Floe lake along the rock wall, though it may not beat it (in my opinion at least). It is however 100% worth the trek up and the boat ride acrros and the group of hikers that go with you. 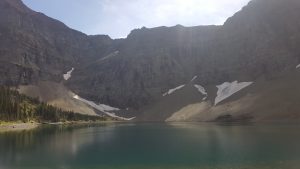 I should also say that if you are planning on going to Crypt lake than I recommend Sunday to Thursday… we had 80 people on the trail today.  I thought that was crazy busy… Apparently they had nearly 400 on Saturday. 400. Ya.

To wrap it up the hike out was simple and enjoyable and the boat ride back across the lake in the sunshine provided great views of Waterton village and a killer view of the chateau as we approach town. I camped at the municipal camp site which was very….. municipal. But it had showers soo.
And close to town and a cold beer to celebrate making the trek to the United states!!

Ill wait for my ride in town and I am pumped for the next couple weeks of fun! 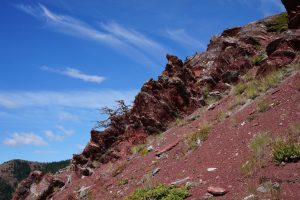