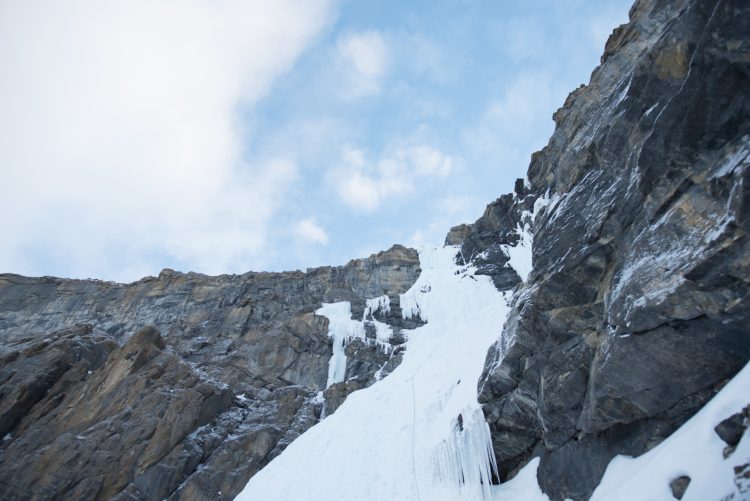 Up to this point the first few days, all dozen students have been in their own accommodations. Five at the hostel, three in the hotel and the other 4 at their own places. Including one who drives every day from Calgary, which is impressive!

The twelve of us and the two guides pile into one large van, thankfully with a trailer full of our equipment and food! The air of the van is electric. This week will be spent using all of our new climbing skills to get to the next level; building anchors, using ropes for top roping and repelling, tying a dozen different types of knots. Basically how to climb without killing yourself. And the entire week is spent at the Rampart hostel, away from power and running water. Or at least that’s what we thought. 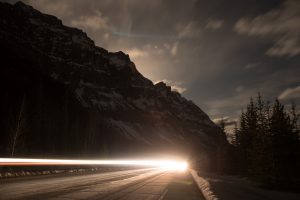 The arrival at the hostel and unpacking of food an equipment has the group scurrying around, picking beds and rooms and looking through the food for the week. Eat, pack, climb, drink, sleep… a little. A routine that would be as regular as brushing teeth and making the bed. Early mornings are becoming more frequent as well, waking at 4:30AM to start breakfast and prepare lunches. Everyone crams into the van, were off to the first objective to learn about top rope placement and natural anchors.

Along the drive to Wedge Smear, HW93 is lined with rocky, frozen peaks towering above, a new and refreshed longing to climb every mountain is reborn on each turn of the road.

Along the drive to Wedge Smear,  HW93 is lined with rocky, frozen peaks towering above, a new and refreshed longing to climb every mountain is reborn on each turn of the road. All of our eyes scanning the horizon looking for ice falls that might be climbable. Make notes and record, ask the guides and check the books. However there was one fellow passenger who seemed fixated on the driver more than the hills. Turns out he is a mechanic, a damn good one who has spent time investigating the crash recordings on these large 15 passenger vans. Naturally I inquired as to the common findings of what happens in this large van when it crashes and was relieved to learn that everyone dies in a fiery implosion with a near zero survival rate. And I was worried for a moment it would be something bad. 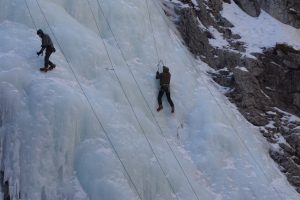 A day spent on the Wedge smear, and a few more in Belfour creek. Our skills at climbing ice are improving every day. And those who hesitated to climb at first, possibly due to lack of experience were now almost racing to grab the ropes to ensure they could climb as much as possible.

Extending your tool to a tiny crack, or 8mm ledge and placing the tip of the tool onto the rocks surface and holding on.

Then came the “Dry Tooling” section, or “Mix-Climbing” in which you climb rock, or rock and ice with your ice climbing tools. To climb rock with an ice axe adds an entirely new element of skill. You cannot simply swing your tool into the rock, or kick your toes into the stone. A kick and swing motion now becomes a look and place. Extending your tool to a tiny crack, or 8mm ledge and placing the tip of the tool onto the rocks surface and holding on. Leaning and staffing and flagging with your legs, placing the tips of your crampons on the same ledges, careful to balance and not twist your legs. These techniques among others allows you to scale a rock face as you would a dagger of ice. A mixed route may have you start on the ground climbing rock, approaching an icy area above, and transitioning mid climb to the ice techniques to continue up the route. Probably one of the coolest things I have ever done. 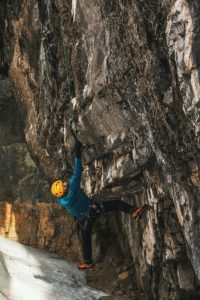 We practiced our mix climbing and dry-tooling both at Bullshit Canyon (Near Maligne lake by Jasper) and Heffner creek on our return route to Canmore.

Upon the return to the Rampart Hostel we were greeted by the, then vacant hostel manager, who was quite surprised to see us. Interesting as a booked visit shouldn’t be surprising. More on that news later.

The herb and intense heat was harsh but cleansing

At this point after a few days of climbing we were longing for a hot steam. There are no showers at the Rampart Hostel, although there is a steam hut. Groups of us poured into the fire heated hut to find the assistant manager and a gentlemen from Mexico filming a climbing movie; who were also enjoying the sauna. We sat and relished the relaxing feeling of steam and when more water was added, mitch the assistant manager would also burn some plant oils gifted to him only days ago by another visitor. The herb and intense heat was harsh but cleansing. Naturally a quick dip into a glacier fed, ice cold stream is the only thing to do. Then sprint back into the steam hut to warm again. The cycle of intense heat, then freezing water did wonders on loosening the sore climbing muscles.

Unfortunately the next morning we informed that we would not be returning to the Rampart as the booking was never completed and the hostel was full, without our 14 person size crew. On the positive, one of the guides is friends with the owner of the C.O.E (Center for Outdoor Education) near Nordegg and allowed us to stay there the remainder of the trip…which worked out well as the new location had showers and power! Luxuries! 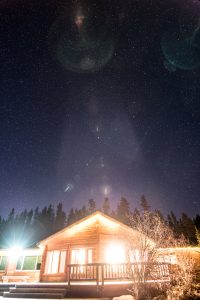 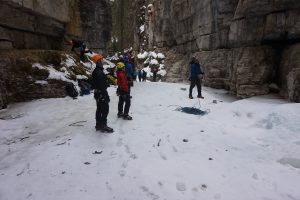 three hours later, four pitches up and two ropes, both teams made their way up hundreds of meters to the rock outcropping above.

However the real climbing started at 5:30AM when four of us and two new guides travelled to the Shades Of Beauty Ice climb, challenging the two teams of three with a four pitch climb. Not to mention an absolutely grueling hike up to the ice climb too. However three hours later, four pitches up and two ropes, both teams made their way up hundreds of meters to the rock outcropping above. The view alone was worth the climb. Overlooking Beauty Creek and North down the valley HW93 carves through with its asphalt like a lazy river.

What took us so many hours to climb took us a tenth of which to repel down. Eat, drink and pack. A brief hike out then a road trip back to the COE to see how the rest of the group made out. The last evening was filled with stories of the last two days and laughter, the entire group was pumped about the week and the level of skill we are now at. We scrapped together some money and hit the liquor store for some beer to help celebrate our accomplishments.

Ice climbing will be a sport that I will not soon give up……once I save enough money to purchase the gear I need!