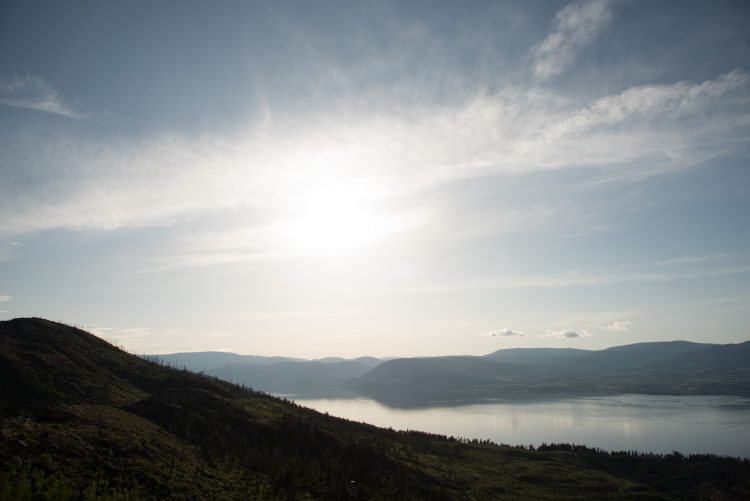 The beginning of the official rock climbing section started with a prep and travel day. Those of us who were out in the Kelowna area drove to Skaha Lake area and those who didn’t met in Canmore and travelled with the guides out to meet at the camp ground.

The next week will be spent learning to climb rock with good technique, rope and rescue skills and more technical anchor building and rappel setups. So sweet.

I had no idea how much fun rock climbing can be especially doing multi-pitches, lead climbs

I will say that I did not have much outdoor rock climbing experience, though I have spent some time at the indoor climbing gym in Edmonton (Vertically Inclined). And I was excited for the rock section, though not as much as the skiing and alpine climbing but that was about to change. The few days prior to the Skaha trip was basically my intro to rock climbing and bouldering and it was an absolute blast. I had no idea how much fun rock climbing can be especially doing multi-pitches, lead climbs up crags and even learning rope management and rescue systems in case someone gets hurt.

The beginning of the course started with some chilled out climbs on 5.6-5.8, practicing the lower angles without using any hands and the steeper angles using only a limited range of movements such as palming and smearing.

Our luck continued on the weather front within the Penticton area, climbing nearly every day in the sunshine with little wind and little worry of rain or otherwise! Much of our time was spent with shirts off, tanning while belaying and climbing. 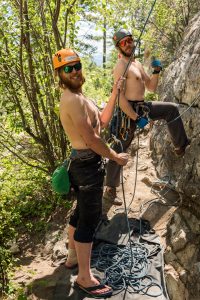 The objective of the rock section is to build some technical climbing base skills, learn how to manage ropes and rescues and anchors so that the last few days could be spent climbing harder an farther. For anyone interested in climbing outside the Skaha bluffs are well set up area of crag climbs for all skill levels and is definitely worth checking out!!

Both types of climbing can be an absolute blast, though ‘trad’ climbing (as it is often called) is really the most badass version.

Once our technical skills were strong enough we learned about ‘placing gear’. This is where things get really cool. There are two basic types of climbing you can do, sport and traditional. Sport climbing is climbing in areas that have bolts or permanent anchors installed to the rock face to allow a climber to clip into as they climb. Traditional climbing is where you climb in areas that have cracks within the rock that allow you place gear to clip into where available. Both types of climbing can be an absolute blast, though ‘trad’ climbing (as it is often called) is really the most badass version. Oh, and there is ‘mix’ climbing where you use some bolts, and other areas are more run out so you need to place a piece of gear. 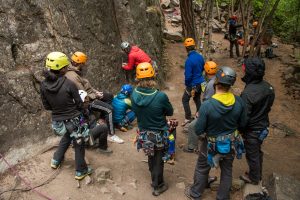 Trad gear or ‘protection’ or ‘pro’ typically includes three basic types of protection though there are many options available. The first type we learned about are ‘Nuts’, wedge shaped metal pieces with a cable that are slid into a crack or opening where it constricts and gives the climber something to anchor themselves to the rock with. The second is a ‘Cam’ and works basically the opposite of a clamp. When you put weight onto the cam the device opens or widens in the space providing the holding power to give the climber protection. The last toy we got to play with are called tri-cams. Sort of a tear shaped Nut with a webbing strap fixed to it that creates a ‘rolling’ pressure that allows the tri cam to place an outward pressure to the crack or opening providing the climber protection.  All of these devices need to place very carefully as they are what will keep you alive if you fall! When lead climbing the objective is not to fall obviously but sometimes shit happens. 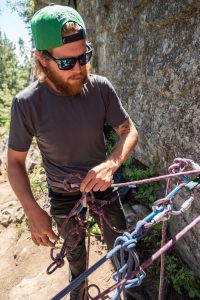 Oh, and practicing falling is nearly as important as practicing climbing! When your climbing you need to be careful that you fall properly as it were. If you fall too close to the face of the rock you will slide down the face of the rock and ‘cheese grate’ you body. If you push off too hard or rotate you can flip, turn or twist making the coming impact with the rock difficult to brace for and can also lead to some nasty injuries. But I will say when you are on a lead rope to a fixed anchor and practice falling from 3 or 4 meters above, travel 6 to 8 meters through the air and then swing back to the rock is quite exhilarating! And if you belayer is paying attention they will jump into the air as you fall, lifting them up and giving you a cushy return to rope tension… hopefully!

travel 6 to 8 meters through the air and then a swing back to the rock is quite exhilarating!

And so our life for the week is cook food, clean dishes, chill at the beach in the evenings and spend all day climbing rock and hanging out (yes pun intended…not a good one though). Eventually we split into groups and practiced our multi-pitch climbing and started climbing harder and harder routes!

Multi pitch climbing is where you and your team climb the length of the rope, set up an anchor somewhere on the rock face and then climb again from your new elevation. Cool.

So I will say that initially I was interested in rock climbing but now I am in love with it. There is something so strangely addicting about rock climbing, to see if you can climb harder and farther. 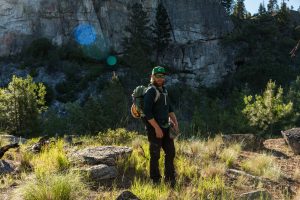 I only made it one bolt farther than James. I knew I was tired but not that tired!

On the last day we split into a bunch of teams, and I had the honor to climb with two of the more advanced climbers in our group. We set out for the Fortress wall looking for a 510.b climb up a corner of the fortress wall and set up our rope and gear. James was first to lead, the strongest climber of us, yet he only made it up 4 bolts. Sort of surprising actually, then it was my turn. I only made it one bolt farther than James. I knew I was tired but not that tired! Then our third guy Nick took a turn, making it bolt 7 of 11 before he took his first major lead fall. Nick fell of a small overhang a good 30 or 40 feet through the air before I caught him. He was pumped that it was a smooth fall. I was pumped I was paying attention!

But stilly, why were we struggling on this route so hard? Well, after 3 hours of climbing we finally made the route. We went back to our guide book and realized it was a 5.11d climb. Dammmnnnn but we did it!! On Lead! So no big deal.

The next climb we did was the original 5.10b we were looking for, two routes over and I got first dibs on leading that climb. It was such a rush climbing a new route within my skill level and leading the whole thing without takes (Break using anchors and the rope) bottom to top.

A few climbs more and our the afternoon marked the end of our Skaha trip. What I will say is that anyone reading this blog who wants to climb, I’m in. What a rush!! 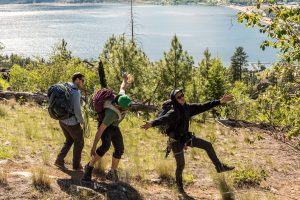 Brendan, Myself and Andrew on the ‘Send Train’.