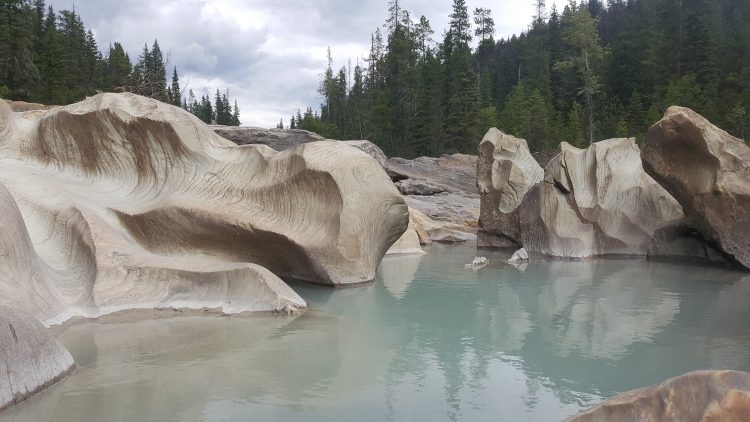 Rest. Rest for four days. So badly needed, to give my knee a rest and my back a soft surface and my mind a break. And to see Kristin!! Her joining me for this intermission of the hike is much needed time together and I couldnt be happier that we are exploring the corners of the Yoho National park together.

If Kristin’s visit across the province wasn’t enough on its own, she came prepared with a cooler full of hot dogs for the fire, fresh vegetables (which I have been craving over the damn dehydrated food) snacks, wine and even a second cooler just for beer!!! 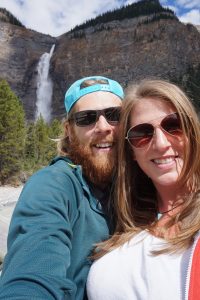 We decided the time would not be wasted though and headed up to Takakkaw falls. If you have not been to the falls, I highly suggest it. The falls are absolutely stunning and higher than the Niagara Falls (though obviously not as much water flows through it). There are a lot of hiking trails that branch from the Takakkaw falls over the valley, and though Kristin and I only hiked a few hours out into the trails we were happy to find other smaller falls, and beautiful rivers carving through amazingly lush forests. 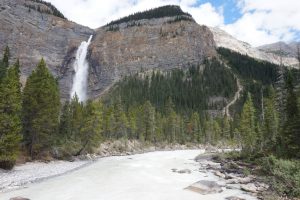 The next day we visited Emerald Lake and canoed for the day, having lunch on the canoe out in the middle of the glass like, bright blue-green water surrounded by mountains. The change of pace from hiking over 20km a day to floating around on the lake was more than welcomed. The weather had also decided to shine its hot face over us nearly the entire visit and our canoe trip was no different. The sun shined bright as we drank beer, ate snacks and left a soft wake, cutting through the lake like an opening curtain.

After a tough day of canoeing (a little sarcasm there) we had determined the only appropriate course of action was to then have a cold beer at the hut on the one end of the lake and relaxed.

After expolring emerald lake we returned to the kicking horse camp ground and spent the evening around the fire, cooking delicious hot dogs, fresh salad and garlic bread.

Another day was spent hanging out in Golden, exploring the town and walking around. A quick lunch at a local pub, of course with another pint! then a walk over the longest wood frame free span bridge in Canada. After a few hours of hanging out in town and exploring we realized we did not have a camp site to crash at for the evening. Slightly reluctantly we chose a local campground out of convenience more than desire. The Whispering spruce camp site off of the highway was….well it was somewhere to set up the tent. I honestly cannot recommend that site unless you desperately need a tent spot.

Later in the evening we returned to the town to catch a live show of an artist I believe was from the US, and had a decent crowd around there outdoor amphitheater. 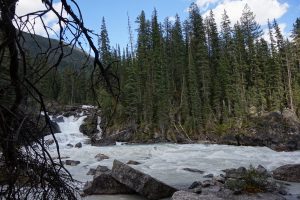 Time was well used for the week, sleeping in, enjoying large fires, listening to music. Even wandering around on a couple of the nicer evenings to enjoy the stars. And the stars out there..In the mountains, are breathtaking.

The next day we headed up the highway to Thompson Falls, and camped at a front country site with a couple of other car-campers. And if you ever get the chance to track down the falls, its difficult to find but well worth it. I believe we spent a few hours aimlessly driving around the forrestry service roads West of Golden!

The falls are a type of rapid and chain of small falls. The violance and crashing of the water has carved otherworldly shapes from the stones. And the water falls over edges and edges and the sound of the water is near defining. Step back a few meters and the chaotic feeling fleas. In short, it was pretty sweet.

A perfect way to recover from the first half of the GDT!! 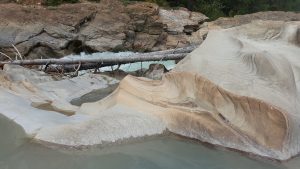 The evening of the last night we had together was spent playing bocce (lawn bowling), drinking beer and wine and consuming the last of the fresh food I was lucky enough to have! Thank you Kristin, for driving across the province, preparing and bringing all the fresh food and packing all that gear up. Most definitely a high lite of my trip! though….I think it could make going back to solo camping even harder after that break!