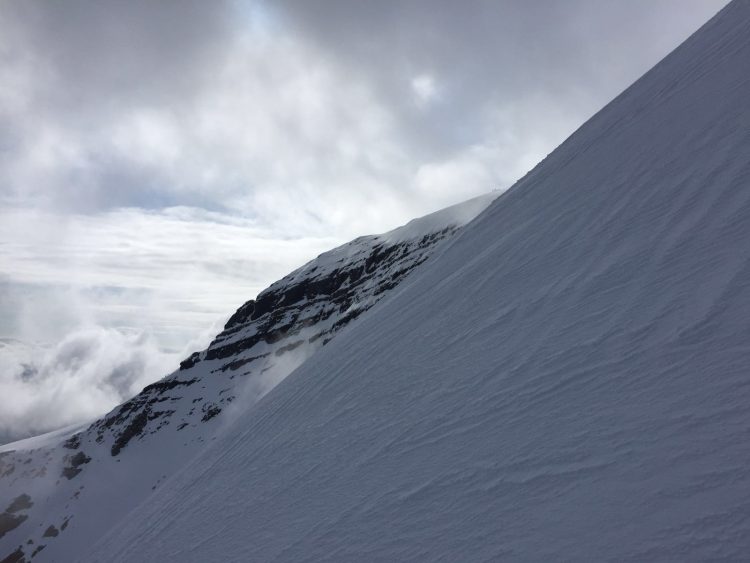 Back to the Columbia ice fields! This time we are front-country camping at the Columbia Ice Fields Camp Ground however. And now we armed with new skills and more experience. This time our visit is to attack an empire size enemy. Mount Athabasca will soon be confronted on three routes with five teams.

The travel day on the way out to Columbia ice fields area was relatively easy, I managed to catch a ride with one of the guys driving his own vehicle. Tunes, leg room and the odd smoke, instead of cramming into the death van with the rest of the crew! Thanks Andrew!

Camp at the CIF Campground is nice, outhouses and a kitchen/cook shack with a fireplace stove. Leveled tent pads and a 5 minute drive to the ice fields centre for an incredibly overpriced beer or burger. The ice fields centre is worth a stop to check out if your ever in the area, as the view Is quite spectacular and the centre has some interesting info. However I do warn you that it is a tourist trap set and run by the sith Brewsters.

a 5 minute drive to the ice fields centre for an incredibly overpriced beer or burger.

The first few days are spent practicing some of the skills we have just learned, getting the crampons back on our feet and practicing glacier travel. This time though our crampons are have a front strap instead of a toe bail and the front points are the horizontal shovels instead of the technical climbing points. The shovel points at the front are wider and stay on top of the snow a lot easier.

We also spent nearly an entire afternoon practicing self-arrest. Self-arrest is where if you slip on a snow slope you need to stop yourself as quickly as possible. And so from different fall positions and hand positions we practiced sliding down the snowy slopes and driving the mountaineers pick into the snow to arrest the slide. Front and back, left and right, upside down. And the weather was beautiful so sliding down the slopes on your back was awesome, though eventually very wet!

After the first few days of practice we headed up the north side of Boundary peak up onto the glacier. The objective was Boundary col, get a feel for the routes and moving on the glacier. Up and over the col was easy, a quick day and across the col back to the valley below. 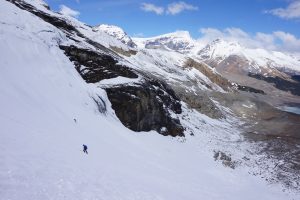 Then came our first summit objective for nearly a month! Boundary peak. (Not Athabasca yet….) Boundary peak isn’t the most prestigious summit but it is excellent practice and the ridge across from the col is beautiful and a really fun hike up over the peak. And the descent down the opposite side presented a relatively low sloped snow hill. Naturally we decided ass-sliding was the fastest route to the bottom, and definitely the most fun. We slide on our asses about a third down the back side. Then an hour of bushwhacking and walking and we were headed back to the camp.

A tired and motley crew of climbers we were back at camp, knowing the summit day for Athabasca was next we prepped, cooked, ate and cleaned quickly. Tomorrow we would be waking 1:30AM to get breakfast on and ready for the summit day. The eleven of us were split into 5 groups, joined by 3 more guides that drove up to the camp that evening. We would split into the teams and approach three different routes. 6 would take the AA Col, a more mellow route but far more distance to cover. 5 would take the silverhorn route, a giant snowy slope to adjacent the peak providing a more aggressive, sustained approach with a little less distance. The other 6, including myself would take the By-Pass route. The By-Pass route is lesser known than the other routes but is one of the ascents along the north face. Not as extreme as the hardest North route but close.

A tired and motley crew of climbers we were back at camp, knowing the summit day for Athabasca was next

The approach a few hours up the morraines left by the now vacant glacier. Up the rock, choss and scree to the base of the glacier. Then rope up and spread out to cross the glacier across to the north face. A long slog across the snowy glacier and we were at the base of the first portion of the climb.

Now before I get into the epic-ness that was climbing mount Athabasca I have to precursor with some important information that I don’t think should be left out. Though I warn you, the following has mostly to do with digestive systems (remember in the beginning how I said we are all already getting comfortable with each other?)

For dinner the night before the summit day, and in infinite wisdom of Yamnuska we were provided dehydrated chili for dinner. And something was wrong…it is still in debate if it was the cooking crew, the chili itself or maybe some residual soap. But something happened in many of our guts the next day. I was climbing with 3 other students and 2 guides. And every one of us was farting the entire way up that god d*mn mountain. The whole way. Relentlessly, and with an odor that could kill most plant life. And it gets worse. The only one not farting was Andrew, as every time he felt the pressure it was accompanied with a solid… or semi-solid. So he had to hold it until he could sh*t. 7 times. Yup, not sh*tting you (pun intended). And I had issues telling the difference at times as well, but what choice does one have? And it gets better.

The whole way. Relentlessly, and with an odor that could kill most plant life.

Our guide that day was James Blench, sort of an infamous climber of the Rockies, who has guided and climbed for over 40 years. And I heard from someone else a rumor that James would, well, take a crap at the base of every single alpine climb he does. So as we approached the base of the climb at Mount Athabasca we all started to prep our ropes and climbing equipment when out of the corner of my eye I saw something unusual. Within five feet of us I thought I saw James drop his pants and squat. No, I did see it. The rumor is true and a few feet from where I stood James crapped at the base of the climb marking the beginning of our ascent.

The climb began with a 50o Snow slope, just above the bergschrund (the crevasse created between the edge of the glacier and the mountain). James lead the pitch and Jimbo and I followed. We both nearly fell into the bergschrund when the snow bridge we were walking across continually gave way. But once over we alternated pitches with the other rope team to kick steps into the crusty snow slope. Kick steps, then plant the mountaineers and technical climbing axes into the snow. Step again, remove and stab the tools back into the snow. Over and over we slowly made our way up the slope. Up a drainage path, over a massive boulder and onto the first shoulder. 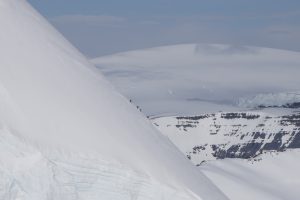 Then came a short traverse on a snow shelf. A band of snow that travels horizontally across the mountain face. Maybe 3 meters high and 1 meter deep. Similar to the snow slope movement but this time with a cliff beneath you a hundred meters high. Once across the traverse came the best part. Mix snow and ice climb up a rock gulley on a 60o slope to the second shoulder. From snow back onto ice reminded me of the beginning of the course.

Once onto the rocky shoulder it was a dry-tooling style scramble on the limestone ridge, dotted with areas of snow. The final few pitches were up a snowy ramp to the ridge, maybe 2 meters in width. So far so good, climbing hundreds of meters, using tools and traversing. And now we stand on the ridge, the three of us and the second rope team. Gathering extra rope we started walking.  Slowly and carefully. Up here there is no protection. You’re tied to each other, and it will take everything you all have to keep yourselves on the ridge should someone fall. The snowy ridge walk is less than foot wide. Some steps kicked into one side of the ridge, then the other. Where it was wide enough we stepped on top. This is a no fall zone. But there it was, just ahead the peak of Athabasca, approached from the North face. 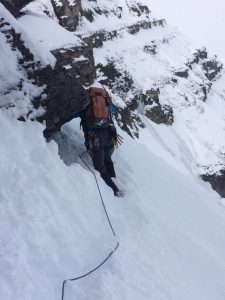 This was an almost surreal moment for me. I have worked so hard to get to the course, to get through the program and learn as much as I could. And 22 months ago I was in the hospital with so many broken bones, barely able to walk to the washroom. The summit of Athabasca. We stood there only for a few moments as bad weather was coming in fast. But it didn’t matter how long I stood there, only that I had stood there. There is not many feelings that compare to that.

Off the back of the summit there is a snowy shelf perfect for changing the rope and having a quick bite to eat and water break. We have missed the easy descent route of the ramp down the front of the mountain by one hour. The snow had softened too much for safe travel. We take the AA col back now, a steep descent to start followed by long slog through choss and scree to the Brewster’s road and back out. 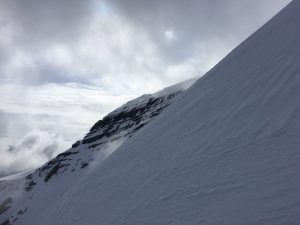 From the Yam-Van to the summit and back took us 13.5 hours. A successful summit in the face of variable weather, exposed routes and exhaustion. I couldn’t be more proud of my team, and every team that day made it to the summit. This has definitely been a highlight of my trip. If I did not have summit fever before this from the Ski Mountaineering, I absolutely do now!!

The last day we woke to 8cm of snow and more falling fast. We packed up wet but in high spirits because of the great summit day previous.