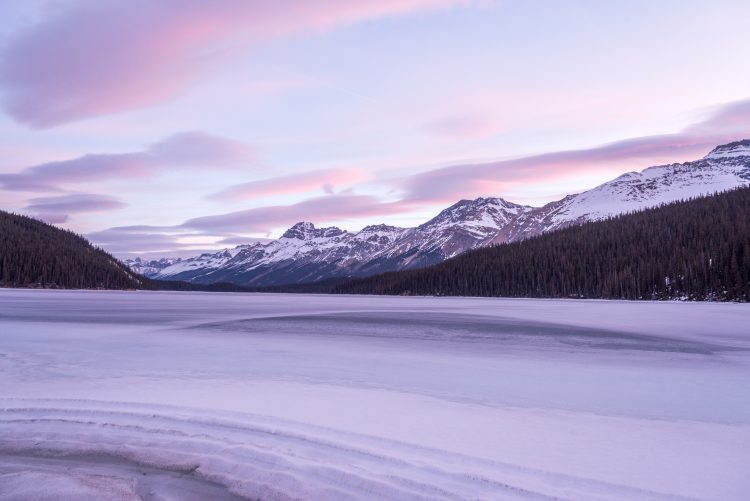 Our first 5 day trip up to and onto a glacier to do a mix of AST2 training, Ski touring and Ski Mountaineering. Also the first trip that saw many of the guys here pushed to their limits, especially those with a weaker ski background. The trip started with the same entrance as the Hot Dog Lake trip, however this time we followed some tracks to the north of the valley up to and past Bow Hut one more time! This time we hiked up and around ‘The Onion’ a large rock peak shaped sort of like an onion and set up our base camp just above the bow hut. The views over the valley down to Bow lake were astounding. 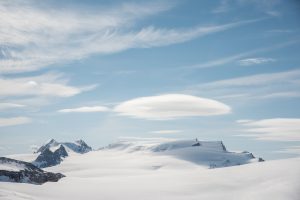 For those who haven’t spent time on a glacier there is a fun fact that you will learn if you find yourself travelling across the desert of snow and ice. The inside of your nose can sun burn. Yup. And it hurts like a b****.  So bring sunscreen and shove a little bit into those nostrils and save yourself some un-comfortability.

It’s a strange, almost sadistic love for climbing, like an addiction. Though you know it’s dangerous you can’t seem to help yourself. You have to enjoy suffering at some level.

The entire trek up to camp one took our group of 14 about 7 hours to complete, carrying 70lb bags uphill for the entire day. While slogging up the slopes my mind was racing with thoughts of the mountains and climbing and skiing and the adventures that lay ahead, as well as the challenges. It’s a strange, almost sadistic love for climbing, like an addiction. Though you know it’s dangerous you can’t seem to help yourself. You have to enjoy suffering at some level. And the heat. The sun was out the entire walk up the steep slopes to the Wapta. Its warm rays bounced off of every surface around you, from the ski, the ground, the hills around you. I burnt. Quickly. And like a desert, there is nothing to provide shade on the glacier no trees or places to hide from the sun. During one rest this was my only solution to find some rest from the D, the suns vitamin D. 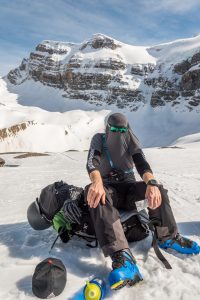 After the walk up the base of the Wapta glacier, camp one is set and we settle in for the night. Day two, we head up and onto the glacier towards Mount Olive. Summit number two. No big deal. A long hike and scramble in our touring boots to the summit of Mount Olive North was invigorating. The feeling of crossing the glacial field and climbing to the summit made us all feel alive. After hanging out on the summit and having a snack we then hiked off part of the peak back to our skis and skied down the opposite side of Olive North back to our camp. A successful and beautiful day, soaked in the sun. The ski conditions were not exactly optimal however we all made the best of what we could. 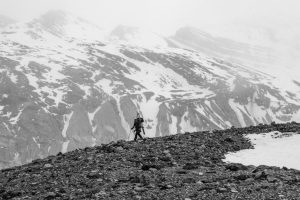 We spent the next morning packing camp and cleaning up, with bags on and Wag bags strapped in we set out for our camp location two. The base of Peyto mountain, on a small clearing we set up our next camp, this time with a little more experience under our belts we built snow walls around the tents to protect from wind and provide some much needed shade. Though we were on a glacier in what was supposed to be winter, we had +50C Weather. On the Wapta this is hot. The sun reflects off of everything around you, the ice under your feet, the hills and valleys around you, the sun starring at you unyielding like a hawk at its prey. We dug in our camp wearing snow pants and no shirts. Needless to say I burnt even more. That seems to be one skill I have mastered without much effort. How to turn red in one day.

That seems to be one skill I have mastered without much effort. How to turn red in one day.

Day Four, our first real failure. From the base of Peyto we gathered our day packs and prepped for a summit attempt on peyto. The big difference between Mount Olive North and Peyto is that the peak run at Peyto is all scree and loose rock. On Olive we were mostly kicking steps into the snow to walk almost like a set of stairs up to the peak. On Peyto the rock varied from pebbles to boulders bigger than most apartments I have rented. Excitement for the summit and maybe a lack of communication between the group and the guides we soon found ourselves spread across the rocky surface towards the summit like ants over fallen food. The people above kicking rocks onto the people below, thus we had to stop for the safety of the group. And due to our inefficiency of attempting to haul ass up the rocky slope in our alpine boots the window for a ski descent was quickly closing. The decision had to be made to turn back towards the snow below and ski back to the camp site at the base of the mountain. That afternoon however we would wrap up the AST2 skills. Mount Peyto will see my return some day! 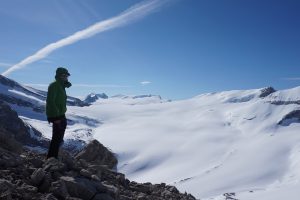 The last day on the glacier saw us wrap up camp to start our descent down the Peyto valley to Peyto Lake. The day started with an ascent over the saddle between the two peaks where an avalanche forecast station is perched on the rocky hills. This is followed by traversing across snow, then rock, then snow, then rock. Until you hit a ridge walk high above the valley, like a narrow ramp winding down towards the lake. Skis were strapped to the bags and we started walking down the sketchy path towards valley bottom, the wind picked up and new snow blew in to make the adventure even more trying. I loved it. 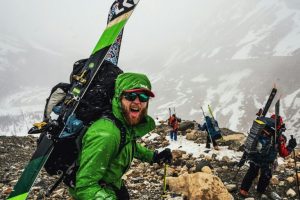 Finally arriving at the base of the Lake, we set up the last camp spot for our Wapta adventure. Finally camping on dry ground down where the temperatures were more steady and comfortable a number of us enjoyed the last bit of whiskey we managed to stretch throughout the trip. The following morning would be the final ascent out of Peyto lake and over to Bow Summit and back down and along the highway to the van. The entire trek was grueling physically and pushed those with weaker skiing ability to the brink. I don’t think it’s appropriate to mention names, however one of the guides with an edgy sense of humor had been getting under a number of peoples nerves. And on the long, steep and incredibly difficult climb out of the Peyto area one of our group decided it would be good to ask “Does saying you have an abrasive sense of humor give you an excuse for being such a massive a$$hole?”. Thankfully the pointed question was laughed off by the group with a little sense of un-ease and a bit of relief for someone to finally say something. It is hard to be angry when surrounded by endless beauty however and the ski descent back to the van was short and sweet.

It is hard to be angry when surrounded by endless beauty however and the ski descent back to the van was short and sweet.

With the long hike out complete many of us were happy to see the van and sit on a soft chair and cruise down the highway back to Canmore to enjoy McDonalds, beer and mattresses.