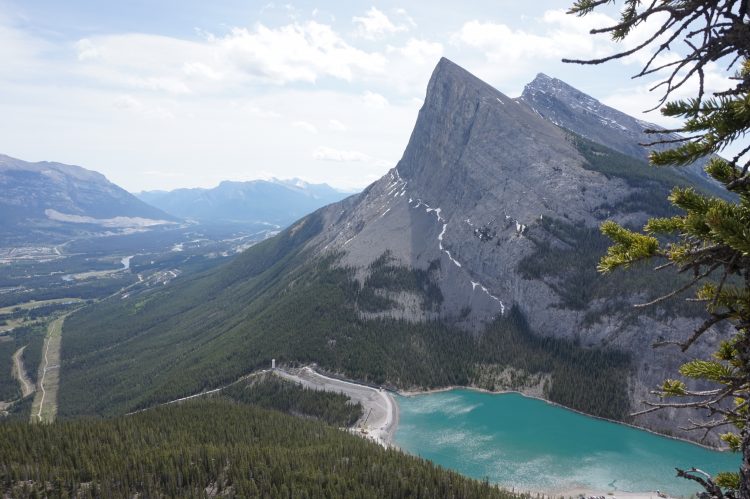 Alpine climbing. Taking everything we have learned so far, adding some alpine management stuff and piling it all together to prepare for Alpine Mountaineering.

Before I get into the details about what we did exactly, let me first drool over what is one of the coolest things you can do in the mountains. To alpine climb involves all or any of the skills it takes to climb rock, snow or ice and using them to get your team up a mountain without any pre-installed or pre-existing protection. Alpine climbing is the path to climbing Everest (at least for now, as all over Europe and spreading across the world where permanent ropes and ladders are being installed).

The goal of this section what it all leads up to. But before we start climbing aggressive peaks we need to compile our skills and a few more into the bag of tricks.

We started these short few days learning body belaying, the act of using one’s body and natural objects around to belay your partner(s) up a slope securely. Essentially you are the anchor and if a team member trips or slips your body is what will keep them on the mountain. This can also include the use of the natural terrain, such as good trees and large boulders to use as a belay station. Or even the act of having each team member walking on either side of a ridge, so if one falls the other is less likely to be dragged up and over the ridge.

This is important for the class 3 and 4 terrain you will need to cover on approaches, or on certain areas of climbs where it is inefficient to set up anchors and ‘multi-pitch’ a climb, so instead you use rope and natural terrain and your body to allow fast efficient movement through the mountains.

This leads to another skill; short roping. Short roping is when you take the climbing rope you have, coil the majority of the rope around you and use a ‘short’ amount of rope between climbers to allow fast and relatively safe movement.

So the first few days were spent messing around on some climbs around Banff, climbing and scrambling scree and ‘exposed’ terrain where the climbing/hiking isn’t technically difficult but a mistake could mean a plummet to your death. So these skills are essential for safer movement within the mountains.

This is also where we were introduced   to a gentleman who works for Yamnuska named Barry Blanchard. For those who know of him I need not say anymore. For those who don’t, consider looking him up. He has many first ascents around the world on some of the most difficult climbs in the world. Also his book ‘The Calling’ is an amazing story of his life and some of his climbs and will leave you in shock and awe. So it was pretty damn cool to spend the day with a climbing icon.

Using, finding and relying on protection in the rockies is whole additional difficulty in the rockies. Especially on the unreliable lime stone. And so we were introduced to the use of pitons and bongs. Semi-permanent pieces of protecton that can be installed where cams or nuts may not cut it. A piton is basically a steel spike/wedge that is flat on one side and tapered on the other. At the back of the piton a hole or “L” shape with dual holes are cut into the steel to provide a place to tie into. The Piton is then hammered into a small crack, continually until it is wedged the hell in there. As you pound one of these things into the solid rock the vibrations of the piton change giving it a higher and higher ringing tone. To remove? Bash the shit out of it… or just leave it there as they’re cheap and sometimes not worth the hassle to remove.

Oh and a bong is basically a large rounded wedge, sort of taco shaped that is placed into a constricting larger crack and rammed into place. It gets its name from the bonging sound it makes while hammering away. Neat. 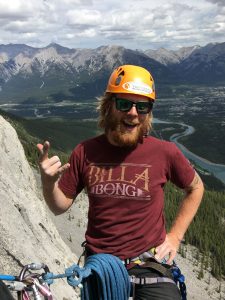 On the last day of our Alpine climbing Section we split into small teams of 3 and went for a full multi-pitch day. My team ended up on EEOR (East End of Rundle) mountain climbing the True Grit, econoline and geriatric lines. This included mixed, trad and sport climbing from 5.8-5.10c climbs 550’ up the rock face. It was an amazing day, 8 pitches up the rock surface, climbing the sticky lime stone rock hundreds of feet in the air. The views were unreal, the climbing endless and the feeling of being up the vertical stone face was a rush like I have never had. The anxiety walking up to the mountain side knowing we were leading up the face, anchoring in and belaying team mates. Switching and pitching our way up over and over. The next time I find myself at the base of EEOR I will climb the TrueGrit route of all 5.10c the entire way. 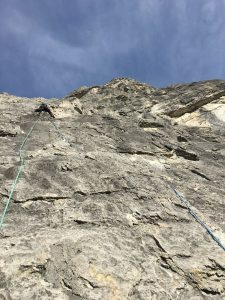 Then after a day of climbing we organized ropes and set up for a double rope rappel in three-four stages back down the mountain. I would climb some things just to rappel. So much fun!