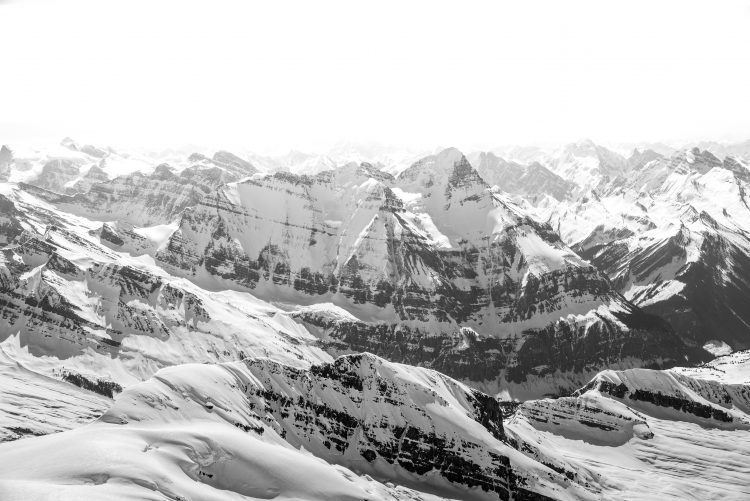 The words roll off of my tongue and excite me just to hear them. Ski Mountaineering.

After a much needed day of rest in Canmore between the Wapta trip and the coming Columbia trip our group met on that Friday morning to gather gear and load the van again. The original plan was to take the more commonly used access to the Columbia Ice field via Saskatchewan Glacier. A much, much longer route but more gradual. Saskatchewan glacier also doesn’t have as many crevasses or seracs. For those who don’t know, crevasses are large openings through glacier ice that is slowly moving across the surface of the earth. Cracks into the 3, 10, 100m thick ice. Seracs are areas where the glacier has creeped over a cliff or side of the mountain and the overhanging massive quantity of ice curls over the convexity of the mountains edge. This affect creates a real hazard. Hundreds to thousands of tons of ice can fall from the mountain side at any time.

This shorter but more aggressive entrance takes you through the field of crevasses and exposes you to the deadly serac fall on each side of the icy ramp to the Columbia ice field.

I mention this because the morning of our departure we learned from other travelers that the Saskatchewan entrance was subject to the same conditions that provided the less than ideal snow at Bow Summit and the Wapta. The Saskatchewan way would be hours of slogging through mud up to knee deep. And so the decision was made to take the Athabasca entrance. This shorter but more aggressive entrance takes you through the field of crevasses and exposes you to the deadly serac fall on each side of the icy ramp to the Columbia ice field.

Most people might think this is not a great trade off. I however, could not have been more ecstatic. You have to understand that I have driven by, down to and parked at the Athabasca glacier looking up to Mount Andromeda and the glacial entrance to one of the worlds largest ice fields. Over the last 7 or 8 years I park there for hours every time I drive Highway 93, which is about 3-5 times a year. I look up at the dangerous entrance with a longing to find a way up there…..safely. And now through the extremely warm winter we are being forced to the Athabasca and I couldn’t be happier.

We drove up to the parking lot of the Athabasca and began unloading the gear. The morning filled with laughter and excitement, even some nervousness from the others. A long skinning up the entrance to the Columbia awaits our attempt to penetrate the doors to a desert like ice field with access to some of the most incredible mountains.

Naturally our indestructible team work granted us the skills and ability to navigate through. No crevasse issues. No serac fall…..At least not while we were under it. 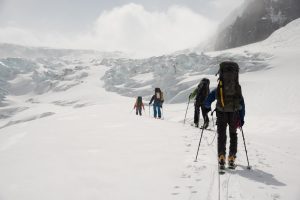 The first two nights were spent just above the crux of the glacier as it transverses to the ice field, only a small distance from the formation of the crevasses.  We dug our camp in with precision practiced over the last couple weeks and bunkered down for the windy and cold nights.

Day Two, another dream conquered. We woke early in the morning and packed our day bags with food and avalanche gear and all of the layers we might need throughout the day. We set out in a South East heading, towards our first 11,000ft (3400m+) summit. Mount Andromeda. For those who know the Athabasca glacier it’s the most badass mountain seen along the side of the Athabasca glacier entrance (Arguably). And today we climb it. The approach was relatively easy, to the foot of Andromeda. Then the slog around unnamed peak towards the south and we were headed up towards Andromeda’s peak. We stopped about two thirds of the climb to remove our skis and climbed to the peak of one of the coolest mountains I know and love. And the reward, other than standing on one of the rockies 11000ft peaks was to see in the North a floating giant. 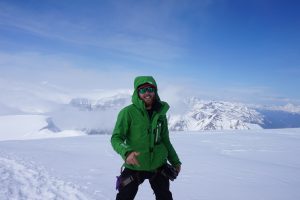 A fire lit inside the stomachs of everyone standing on that summit that day and I knew we were going there.

Mount Columbia’s peak was visible in distance, with the low cloud line filling the ice fields, only the highest peaks were visible to the North. And the top of Mount Columbia, the highest mountain in Alberta pierce the cloud and appeared to float in the distance like a massive castle in the sky. And as the group sat above Andromeda looking North I think it sank in. We can do this. We can climb Mount Columbia. This is especially exciting as it is usual that Columbia is done at the end of the program on the expedition, not just for the Ski Mountaineering. But a fire lit inside the stomachs of everyone standing on that summit that day and I knew we were going there. 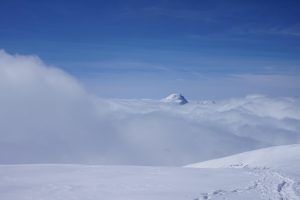 Day 3, it was decided. We broke camp, loaded our ungodly heavy packs up and started north towards ‘The trench’. The trench is a massive valley of ice cutting through the ice fields separating the main field with the approach to Mount Columbia. This is where we would stop and set up camp two, at the top of the trench. The view from the trench was incomparable and equally difficult to explain. Andromeda and Athabasca in the distance behind us. Mount Bryce to the West, the North Twins to the North and of course Mount Columbia. The goliath. Its so massive that it seems only an hour or twos trek to reach the base. Again the weather was unyielding in its intensive heat. 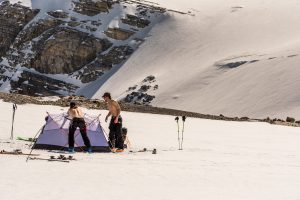 Day 4, the deceiving size of the mountain proves that impression wrong. I believe it took us 4 hours to reach the mountain base and begin the ascent.

The hike up to the peak was long, each horizon of the mountains top gave way to another pitch of climbing up and up.

As we climbed up Columbia on the bottom half to third we ditched our skis (to my regret, though some of the group were not skilled enough to ski descent the aggressive peak). And began to kick steps up the pitch of the mountain. The steepness was such that you had not need to lean forward at all to reach and touch the slope in front of you. The hike up to the pek was long, each horizon of the mountains top gave way to another pitch of climbing up and up. The excitement of conquering this beast kept my legs and muscles burning and we soon reached the summit. It was a perfect day, a perfect climb. The blue bird sky gave us hundreds of Kilometers of view, looking over the vast expanse of mountains. We could even see Mount Robson in the far, far distance to the North. 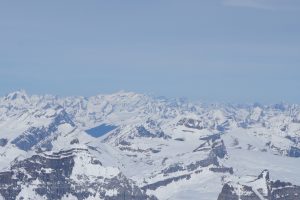 The descent down to the skis was much faster than the climb, though the repetitive impact of each step you drive your boot into with to maintain a solid footing shakes the body and the joints.  Barreling down the side of the mountain soon became a very physical reminder of the injuries I had sustained in my accident. My ankles, my knees, even my ribs started to hurt and ache were bones had previously been broken or destroyed. It was however easy to press on after crushing a dream I thought was years in front of me.

The ski descent from Columbia to the trench was easy and we moved quickly back towards camp. The trenches ascent is natures ‘kick in the pants’ to remind you of the energy you burned on the way up. Our group slogged the rest of the traverse back to camp two and instantly started and ate dinner. Almost like a reward from the weather gods for a successful summit we were blessed with a magnificent sunset backdrop around Mount Columbia. We sat in our camp and watched the sun slowly lower behind the surreal view of the North Twins and the now conquered Mount Columbia. 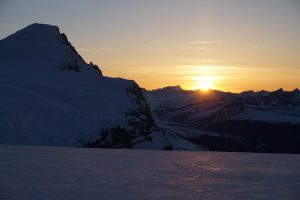 So naturally when we summited I peed on it.

Day 5, now what? After conquering two 3400m+ mountains, including the largest peak in Alberta what is next? Snow dome. I know, it doesn’t seem like quite the climb, and its peak is not overly impressive, its ski conditions poor, its approach dangerous. But it is arguably the only (or one of two) Hydrographic Apexes in the world. This means that a snow flake that falls on the peak of Snow dome and eventually melts can end up in one of three oceans; the Pacific, Atlantic or Arctic ocean! So naturally when we summited I peed on it.

I looked down to see a black, endless hole. My leg had just gone through a snow bridge over a massively deep crevasse.

Snow dome is a almost more of a mountain of Ice than rock, which makes its terrain quite variable and riddled with crevasses. We were able to successfully navigate the terrain however when we reached the peak I stepped out of my skis and ‘post holed’. To post hole is when your leg and foot punch through the crust of the snow and you sink into the snow. Though it didn’t instantly hit me, as I pulled my leg free thinking I simply punched into deeper snow I looked down to see a black, endless hole. My leg had just gone through a snow bridge over a massively deep crevasse. And we had taken the rope off just earlier as we thought we were free of the dangers. Fuck. Naturally everyone was instantly back on their skis to distribute weight, we started to make our quick exit. Summit 3 complete.

On the last day we broke camp and made one long push back to the Athabasca glacier and began skiing out and off of the giant ice fields we had just conquered. Though one minor changed made the exit a little sketchier. The warm weather we were blessed with on our trip had loosened a lot of the serac from above and massive chunks of ice had fallen and continued to fall over the only entrance and exit to the ice fields. We spread out and made one quick ski down, under and out of the serac danger as efficiently as possible. The skiing was awful, over fist size ice chunks, around boulders the size of cars made of glacial ice and around the hundreds of crevasses back to the parking lot. 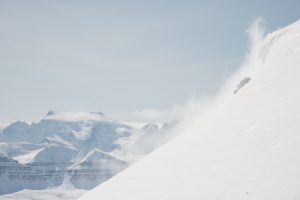 The realism of the danger, is at times, difficult to maintain while you are climbing, or skiing, or distracted by the endless playground you are unlocking.

Along our departure from the ice fields I was deep in thought about what we had just accomplished, what we put ourselves through physically and the danger we accept. The realism of the danger, is at times, difficult to maintain while you are climbing, or skiing, or distracted by the endless playground you are unlocking. Its joked about among the group as “Resort Syndrome” where if you have skied on a resort, or climbed in a gym you can quickly forget how easy it is to get yourself killed or injured in the mountains. Yet as you progress, as you gain skills, and worse, as you get confident in your abilities you open the possibilities of playing in the worlds most amazing playgrounds. The risk is the mountains ability to change, its unsympathetic existence, its constantly evolving hazards. The reward…is everything.